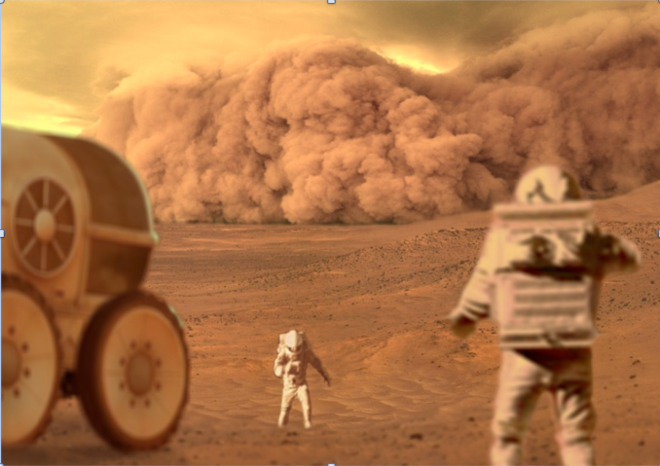 I did not understand it, and frankly, no one did.

What caused the Soviets to keep their victory a mystery? They claimed Mars years before we even placed men upon the surface. Something frightened them so much that they’d rather swallow their pride, than speak about the events that proceeded.

They had won the space race. The greatest achievement in recent decades and yet, they do not speak about it.

The Soviet flag sits upon the surface of Mars, in solitude from everything, even from those that placed it within the dusty furnace of the planet’s soil.

The American crew that arrived, alongside me, touched the surface a few days ago. Ever since we arrived, something has not been right. I feel on edge, cold shivers dance upon my neck, and I have trouble sleeping. I do not know what causes me to feel the way I do, but I know that something is not right.

The only trouble we are having since arriving is interference from the storm, limiting communication with the ISS, the International Space Station, and our headquarters in New York City.

Perhaps that is why I feel uneasy, knowing that we are isolated from the rest of humanity.

We are currently staying inside the ship, due to the storm. Just watching the crackle of the lights outside within the multicoloured sky is breathtaking. Nothing in the books I’ve read have ever captured a scene quite like this. I was in awe.

The red soil was reminiscent of the Texan soil I was so familiar with. Growing up on a farm in a small county often left me wondering about the greater world and the sky I often gazed up, I had now explored.

The other astronauts were quiet, with the interaction between us all being limited. It was unusual; we were often quite talkative on the trip here, between rest periods.

I spent the first few days just documenting data, checking various parts of the ship for operational information and staring through the window wondering why we were alone, with a flag in the distance beckoning us with its mysteries.

Between reading various novels, I brought along on the journey (Charles Dickens novels make the majority) and drinking lots of coffee due to my insomnia and nerves due to the current situation, I decided to dedicate my time to researching Soviet flight records within the reports we brought with us from headquarters.

It seems the Soviets spent the decade of the 1970’s dedicated to research of Mars and the technology needed to achieve the long distance to the planet’s surface. From 1980-1985 Soviet Union data is missing, perhaps removed from various records.

Within this period I believe the Soviets launched a shuttle into space. With the events of the Cold War escalating after the Soviet invasion of Afghanistan, it would be the perfect time to confirm a shuttle launch due to the arisen tension being on that of military actions I theorised.

The question is, however, how were the Soviets able to place the first man-made object on the moon in 1959, but were unable to win the race to put the first man on the moon? Within 20 years it seemed they improved their technology drastically and were able to correct their loss by placing men on Mars instead. That is quite impressive but more so disturbing. If they triumphed over previous odds and advanced their technology so quickly, would they not brag? That is what frightens me.

Something terrified the Soviets incredibly that they remain silent.

I was worried I’d find out.

Another sleepless night just like the nights before. I was gripped by nightmares of strange voices calling my name and the firm feeling of being watched, followed by dark corridors and cool stones surrounding me.

I was much too tired to dedicate more research into the Soviet records. Insomnia was taking a large toll on my physical and mental well-being. I decided to try sleeping again. This time I switched the light off and placed a rag over my eyes, hoping to dim any lights that were made apparent within the room.

A high temperature, that was what I awoke with. Sweat stained my sheets, and I shivered relentlessly, unable to calm my body spasms.

I grasped the bottle next to my bed and gulped the water, feeling the cold crawl down my throat.

I saw shadows of strange folk inching through the halls of the old building in which I traipsed through. They were toying with me, whispering lines in languages unknown. The house groaned, the beams on the roof creaking with every step I took. It sounded as if the very house was alive and angry at my presence.

The other astronauts mentioned nightmares as well. They all looked terrible, their eyes sunken in and often I caught them gazing through the window. Their eyes looked distant as if they were physically next to me, but mentally somewhere else. I wondered where that somewhere else was.

I was granted a few hours of sleep last night and thus felt more rejuvenated. It is a miracle the effect that sleep can have on the body. I did, however, have a dream of the groaning house again, but for reasons unknown, the house began to change into Mars. I was curious as to where these dreams were arriving from. I did not have much of a creative mind, rather that was more my brother than myself. I preferred data. It was succinct and applicable, the way I approached situations.

I, however, could not come up with a theory for this predicament.

Perhaps science could not answer all problems.

My hand was bleeding. Crimson painted my sheets, and my skin burned as if on fire. I could not rationalise this situation; something had attacked me in my sleep. Either that or I’m going batshit crazy and broke my knuckles.

I did not know what theory was better.

The Soviet flag stared at me. It intimidated me. I was angry, and I did not know why.

They told me they were upset in my dream. I wished I could stop their suffering, but alas I was forbidden to lay sight upon them.

I hadn’t seen the others in a few days. It seemed more quiet than usual. The storm began to worsen outside, the howling of the winds remained etched in my mind even in sleep.

I could barely hear myself think over the crackle of the thunder. We were running dry on food supply. I was going to write a ration table I thought, perhaps to show the others that my position was just as needed as theirs was.

I took her advice last night.

We spoke again. They said we would never understand them.

The ones that came before didn’t understand either.

I need to go. If I stay they will take me.

They told me they took the others.

I found God, and there are many of him.

If you are reading this, burn down your places of religion immediately.

They are coming for you. They are not happy.

This short story was influenced by a writing prompt on Reddit, in the Sub-Reddit “Writing Prompts”.

[WP] We finally get men on Mars and they discover an old Soviet flag placed down decades ago. The Soviets won the space race but for whatever horrifying reason didn’t say anything. from WritingPrompts