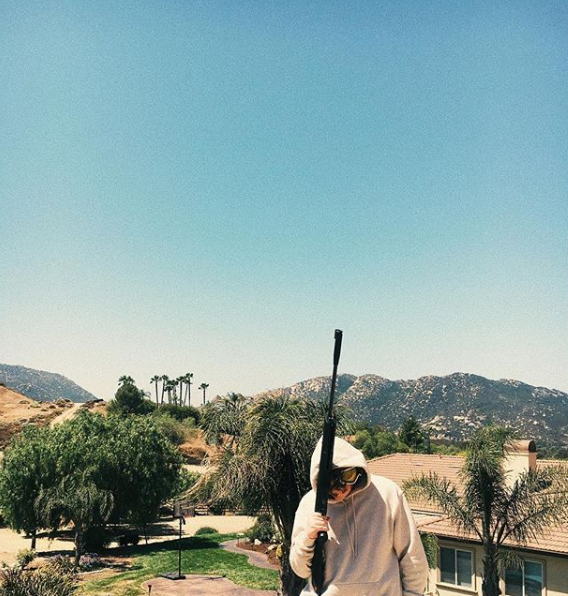 Artist Steele11 is a 17-year-old artist who has already experienced being a part of the industry with his feature on the song “Ride Around” alongside YouTube and social media star Tanner Fox. The young artist has hundreds of thousands of plays on all his songs, including over 1 million on “Ride Around.”

Steele11 chose his artist alias as his last name is “Steele” and the number “11” is a significant recurring number that impacts the artist.

“I was number 11 throughout all my years of playing soccer from age 5 – 16. The year my mother had a cardiac arrest during surgery was in 2011, and I was 11 at the time. At 11 o’clock that night I had been told my mother was dead and later found out she was recovering in the ER. And I always so just so happen to see the number “11” everywhere,” says Steele.

Steele says this phenomenon has continued throughout his life and gets more “weird.”

Artist/producer JVLES also has told Steele that this number [11] could be his “Angel Number.” JVLES also further explained what this means and its possible relevance in Steele’s life.

I always ask personalities to describe the hardships that they have gone through in their career, and how it has impacted them. I also ask them to explain how they have persevered through said hardship/s. I believe this question is important as it helps readers and fans understand them better, and also increases relatability.

Steele states that “on January 1st, 2015 I got my first panic attack from smoking AK – 47, a very strong strain of marijuana. And I thought I was going to die. This led on to me having multiple panic attacks throughout my days at school, and it led me to be suicidal at only age 14.”

This continued to have an impact on Steele’s life and further exacerbated the young artist’s mental health into a downward spiral, causing bad depression and severe anxiety.

“I had terrible depression for a couple months and my parents decided to take me to a therapist where they helped me come up with plans to stop my anxiety from getting terrible, and how to ease my depression,” says Steele.

“Times were very rough and I soon got over it until June 9th, 2017. My other good friend Mason committed suicide. I felt as if my life was turning upside down. And that was when I began to make music, [on] June 10, 2017. I felt as if all the pain had gone away the second I recorded on the mic. It was a way to release my inner emotions, without having to tell people my thoughts to their face,” says Steele.

If you or anyone you know is experiencing suicidal tendencies, please seek help. I will link appropriate helplines at the bottom of this article.

When asked how Steele would describe himself as a person, Steele says that he’s “nice as f***” and he doesn’t care how many followers you have or how many plays you have.

Steele says he tries to make his own sound and reflect who he is under all the music business.

“ I never want to be like anyone else and I want to be the person I truly am under all this [music],” says Steele.

Regarding the differences between Steele’s craft and others in the scene, Steele believes that he’s making music that will be mainstream by 2060 [his sound is very different now]. He also believes in the philosophy of quality over quantity and strives to make each song better than the previous ones.

“I write all my s***, and have a sound I feel like no one can match,” says the young artist.

Steele says when he creates music, he does it all on a mic he purchased for $200 USD off of Amazon. He believes that your equipment shouldn’t stop you and that you don’t need the best equipment to pursue your craft.

“I’ve only been in a studio once in my life and that was when I was in LA. Other than that, I just need to be in the right mood and its go time,” says Steele.

I also asked Steele how long has he been pursuing his craft. Steele says only a short period has he been wholeheartedly focused on his music.

“I’ve only been making music for little over a year now, but only started popping about 8 months ago. I have a hand full of labels talking to me, but, I’m just trying to pick the right one. As of now, I don’t give a f*** about nothing but the money.”

I was very interested in Steele’s relations with YouTube and social media star Tanner Fox who hosts over 7 million subscribers on just YouTube itself, in which I asked him to elaborate on how they know each other.

“Tanner is a very close friend to me at this moment of time.  He was one of my biggest role models when I used to ride scooters as a kid, and it’s crazy to be such good friends with him now. I can’t thank him enough for giving me all the opportunities I’ve been handed throughout these past few months, and I will forever and always be grateful for that,” says Steele.

The duo created the song “Ride Around” which has over 1 million plays on Fox’s YouTube channel, with countless amounts of comments to accompany it. Reception to the video was also positive.

“After the video was uploaded I definitely had a substantial growth within a few days. And as of now, 35% of my fans are Tanner Fox fans. I don’t care too much about having such a young fan base. But I am later on hoping to grow a true, loyal loving fan base that wants to see me grow and pursue my dream of becoming the next big star,” says Steele.

Steele also elaborates on the process of how the music video was created.

“The process was surprisingly really fast. I booked a ticket to California and stayed with him for a week. One day we decided to make a song together and the process just began. We wrote the song at his crib and headed to Dylan Matthews studio to record the song,” says Steele.

The artist also speaks about his greatest achievements thus far regarding his career.

“My biggest achievements so far have been. making it out to LA, creating a good relationship with one of my childhood idols and being able to make money off something I absolutely love doing. Also that I don’t need to work a 9 – 5 [job],” says Steele.

The 17-year-old artist also gives advice to those in the scene who may need advice on how to better themselves and their craft.

“Be yourself and don’t let people get to you. I was called trash by my idols and it made me want to quit making music. However, 6 months later those same kids are hitting me up to make a song. Just know SoundCloud is filled with big ego weirdos and they’ll do anything to make you feel down about either yourself or your music,” says Steele.

Steele also gives notice to the direction in which he sees his career taking him this year and in the coming years.

“My goals for 2018 and so on, are to be able to support myself with a well-paid income.  I want to move out to Los Angeles within these next few years and live in a house with all my homies in the “ C**T CLUB!” I want to make it up with all my homies and get this check. My number 1 concern is to make my family proud, and I sure hope I do.”

Steele also states that more singles are on the way, a new tape with “Prodbyhim” is coming soon and that music videos are in the works.

As for artists. Steele would like to work with “Playboi Carti, Lil Uzi Vert, Juice WRLD, and all the homies in C**T Club”.

To stay tuned with Steele11’s career, be sure to check out his social media listed below:

If you are experiencing suicidal tendencies or just need someone to speak to, here is a link to a site that has suicide hotlines for all countries.

5 thoughts on “Steele11- A Professional Talent”