Artist Warlord Colossus has it all worked out. A strong vision, an impactful marketing direction, and powerful vocals, the artist is creating a new wave.

The mask the Warlord wears helps the artist stand out, proving to be not just a decal but rather, a marketing tool that creates discussion.

Time to remove the mask, and examine the Warlord.

WARLORD TOMAHAWK GORILLA is one of my favourite of the artists songs. It captures Warlord’s essence perfectly.

The Warlord began his journey into the music career during high school. The artist noticed a group of students freestyling with one another who were “good” at it. Colossus noted the positive energy and it fuelled his drive to start music himself.

“I thought, if these kids my age, in my group, could do this I could too,” says the artist. “There was this voice in my head screaming, “do this,”I fell in love instantly.”

The artists’ greatest inspiration takes place of that of Suicideboys.

“They [Suicideboys] opened my ear to the art of engineering and how important layering can impact the style you give off for your sound and image. Layering and engineering are honestly an art form of their own, aside from the beat production, the flow and words you use,” says Warlord.

Warlord states that the group opened his eyes to all the aspects you need as an artist, including the image you portray.

The artist is an expert in the field of marketing.

Colossus doesn’t just focus on one genre of music either. The artist is also very experimental with his sound.

In his song “Run Away” you’d have to look twice to acknowledge that it’s the same artist. The Warlord is very talented, and just as his voice is powerful, it can also be sweet, as shown in the song.

The artist also has suffered many hardships along his journey. These include those telling him his career path is worthless, as well as hate he has received, even from his own city.

The artist has also suffered from financial issues, lack of motivation, depression and severe anxiety at particular moments.

“My biggest battle was with my anxiety/panic disorder that I struggled with outside of high school. It was advanced terribly by an experiment with acid. The road to recovery was very long and I was prescribed alprazolam, I knew I didn’t want to be on that forever. I could feel it making me dumb, slow, forgetful and sometimes it would make the anxiety worse when I came down,” says Warlord.

The artist then searched for alternative ways to combat their anxiety. Warlord then found Brazilian Jiu-Jitsu.

“I sought meditation, to find my balance in my chakras to release what was troubling me. I’ve learned that if I’m anxious now, its either because someone is in my life that shouldn’t be or I am in a position in my life I need to remove myself from. I need to change. I take anxiety as the big sign to move forward,” says Warlord.

“Brazilian jiu-jitsu, derived from the samurai, truly changed my life, saved my life, and still molds me to this day.”

The artist says that growing up he was a part of a military household, so he was always on the move. It taught him adaptability, how to befriend anyone and how to read people and their intentions easily. Because the artist’s father was away at war, Warlord developed an addiction to video games, which caused them to develop obesity. Others started to bully Warlord because of his weight.

Colossus states that his family also suffered a recent tragedy in which his brother overdosed on heroin, and passed away.

“It’s terrible to say or talk about but this did bring my family closer and made me realize that family is above all else. Love comes first,” says the artist.

The artist also gives marketing advice to those in the creative scene.

“Just be yourself in your own way. How you feel is the best way you want other people to see you. No matter what people will judge and hate so why not be the best version of yourself. Also, invest in high-quality photo shoots and the best engineering possible- that will go a long way,” says Warlord.

Colossus also helps artists and other creatives with marketing advice and classes, to help them prosper and develop their image. He focuses mainly on the business aspect.

“I basically set this up over a period of time as I saw I was passing a bunch of artists who were doing this much longer than me. I started paying attention to the details behind the scenes and how this is literally 100 percent of the rap game and what a label does,” says Warlord.

One of the artists greatest marketing tool is that of his mask.

Warlord says,” it was pretty much my background in Brazilian jiu-jitsu and that deriving from the samurai Japanese jiu-jitsu. The mask also focused on the origins of my training which included bushido samurai philosophy to better my life, make good decisions, be loyal and honest, and face your battles and conquer your fears.”

The artist states that he made the mask personal for himself considering that all those historically who wore masks in the art, wore it for personal reasons. 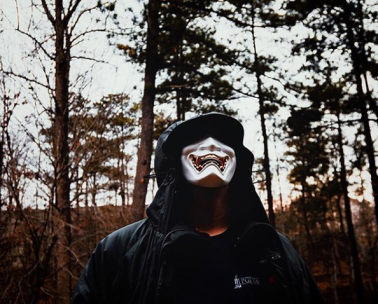 “Also, invest in high-quality photo shoots and the best engineering possible- that will go a long way.”

Nephilim Gang is the title of a collective in which Warlord has created. The group’s title is comprised of the concept being that of Nephilim, “a balance of a demon and an angel.”

“We all have very good and very bad aspects of ourselves in our lives and its what you feed that thrives,” says the artist.

Warlord says that his goal right now is to help the group push out consistent, quality content that allows the group to grow organically. The Warlords main goal is to reach the stage where the group can rely solely on music-related income.

The artist also practiced Wiccan witchcraft in the past. The artist has since stopped after noticing “very evil, dark things.” Warlord is a very spiritual individual.

“I honestly say, to each their own but almost everyone I’ve encountered who practices [Wiccan] has faced difficult situations in life, such as a mental health battle and used it to cope. I started to do this to seek wisdom from outside beings for my music. Eventually, I did stop,” says the artist.

The artist also states that if you encounter evil spirits, ignore them and remember that they have no power over you.

“You rule your own universe, you do not need another beings help,” states Warlord.

The artist has also performed in a sold-out arena, in which “5000” people attended. He states it as being “bitter-sweet”.

“It was a beautiful moment having a ton of support when I was performing my most famous songs, and having a huge mosh pit for me and me alone. That is something I will keep working to grow to experience that in an arena. 5000 people, sold out,” says the artist.

However, it was tolling on them as Warlord states that people will “use and abuse your kindness in this business.”

“No one is here to help you except the people who struggled with you on the come up [rise of your career]. Do not let ‘friends’ take advantage of your hard work,” says Colossus.

The artist is also happy that they can help provide for their mother when needed, with being able to help pay the bills and other services.

“I’m very grateful that I could pay the wifi bill or the car bill for the month. She [Warlords mother] has never doubted my music ability once. She helped me find my [sound] engineer. If I ever need anything, she’s there for me. So in return, I will work until she doesn’t have to anymore,” states the artist.

The artist also has plans in place for coming months.

“I plan to start dropping music projects and videos monthly. I want to make myself create more and hermit in production. I need to improve my life and work on my weak points and I feel consistency in creation is what I’ve been missing,” says Colossus.

The artist also says that the “word from Pouya‘s brother” is that Warlord is “first in line to tour with RAMIREZ.

Warlord needs to get his label deal to fall in place, for it to all unravel. TrashGang is also Warlord’s new “potential sponsor”.

To stay tuned with The Warlords career, follow their social media accounts listed below:

One thought on “Warlord Colossus- Behind The Mask”