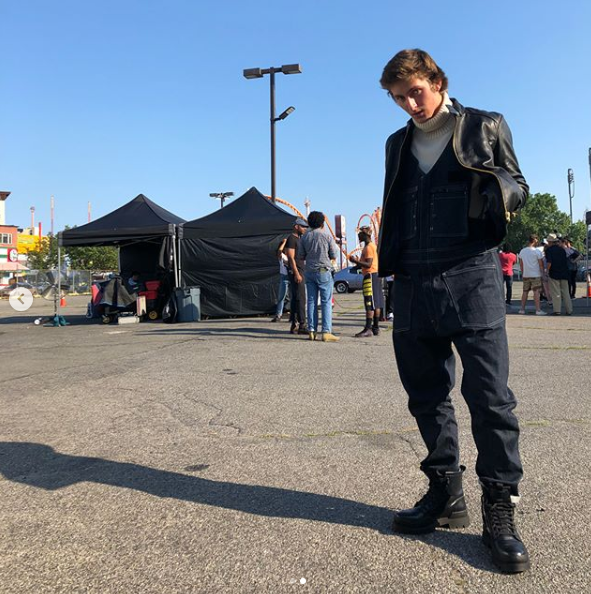 21-year-old Virginia artist Memphis comes forward to speak about his career, hardships, his involvement in large modeling campaigns, his life growing up, his future, and more.

21-year-old artist Memphis had his name given to him by his peers, rather than be chosen by himself.

The artist, who attends college to study business, plays soccer in college, and played it in high school as well,

While playing soccer one day, Memphis scored, and his friend imitated an English commentator’s voice/accent and called him Memphis, after Dutch native “Memphis Depay.”

The name stuck ever since, and has become the artist’s musical alias.

Memphis is also originally from London, England, but moved to the US at a young age, and is now settled in Newport News, Virginia.

The young artist states that he grew up privileged, and had a good life. Memphis comments that his parents were healthy.

Memphis says he was blessed to live in the household that he did, and that one day he will give back to his parents everything that they did and do for him.

Memphis also states that going to college has helped his career due to his skills in marketing himself, and his image.

“There’s a lot about the industry and marketing that kids don’t understand. It’s not just about how hot your music is,” says Memphis.

The artist also speaks about the hardships he’s endured along with his career, and as well as before.

Memphis comments that he’s a very emotional individual, and he goes through the motions of feeling both positive, as well as negative.

“Most of my music reflects what I go through, You can hear the emotion in my voice and through my lyrics. Songs like Pure Spirit, Forfeit, [and others] all are songs that kind of show you what kind of person I am when it comes to how emotional I am,” says Memphis.

The artist comments that he also suffers from people not getting along with him at times. Memphis states that he does not always fit in in various environments, and people often mistake his passion and confidence for Memphis being egotistical [self-absorbed] in nature.

Memphis states that he believes people hate seeing someone being prideful in themselves and their own career.

“I didn’t really fit in, in most environments I was apart of as a child. I’m a very strong, confident, and passionate person,” says Memphis.

Memphis also describes himself as a “regular student” who goes to school, gets his work completed, and focuses on his business. Memphis also comments that he’s disciplined, responsible, determined, and motivated.

“This also flows into my music – I’m always super focused and driven to be the best in anything I do,” says Memphis.

As an artist, Memphis states he likes to let “all emotions flow.”

“I could be a heartthrob one day, a heartbroken sad boy one day, and a pop star the next day. There’s no real telling what you can expect from me,” says Memphis.

The artist also speaks about how he began.

In high school, the artist’s peers began to rap, and Memphis began to rap also. Memphis comments that he started on boom bap, and that it [his music] was terrible

The artist states that he also thought autotune was “corny” at the time, but in freshman year of college, decided to test it out and ended up liking it.

Memphis also states that he has a few achievements so far, but is not “close to his peak whatsoever.”

A few of these achievements include a song that is releasing with artist iLoveMakonnen soon, the inclusion in the G-Star RAW modeling campaign, as well as being on Elevator.

909Memphis for @gstarraw? Winter 2019 #UniformOfTheFree Be sure to visit the GStarRaw Instagram to see me in their new commercial for their winter line releasing soon! #gstarraw Thank you for including me. @dexternavy

“Everything I’m doing right now I feel as if was meant to happen and I’m only growing faster,” says Memphis.

The artist also gives advice to those in the industry.

Memphis states that you must be wary of your surroundings, and acknowledge that you are a brand, and need to act respectfully.

The Virginia artist also comments that readers need to focus on making music that they enjoy making, and be original. Focus on making your sound exclusive.

“Be respectful, too much ego burns bridges. Remember it’s a business, not just some internet s***,” says Memphis.

The artist also states that you need to be yourself, and express yourself in ways that you want people to see you.

Regarding how Memphis makes music, he states that he freestyles most of the time. He comments that he previously wrote lyrics, but he finds freestyling to be more organic and natural.

“I don’t really follow a schedule, I have times where I’m pushing out like 12 songs a week then the next week I need to find some inspiration. But when I find that inspiration, it’s hard to slow me down.,” says Memphis.

Memphis also has a project on the way, and lots of singles in the works.

To stay up to date with Memphis’ career, be sure to follow his social media accounts listed below: