From creating his own clothing brand, absent, to traveling the US for his brand’s pop-up stores, 18-year-old clothing designer Parker, is both inspiring, as well as talented with his craft.

Time to explore the creators mind.

Talented designer Parker Jeppsen, is from a small Utah town called Brigham City. The town was recorded as having just short of 19 thousand people in the 2016 census.

“My friend worked at this local screen printing shop in our town, and I was picking him up from one of his shifts and he still had like 30 minutes or something left. They had a bunch of hoodies laying around so I decided to grab one,” says Parker.

The young designer decided to print onto the hoodie using a printing technique titled “CAD.” This technique basically utilizes “peel and print press” and is similar to vinyl making in its approach.

Parker printed “absent – het ha mecte” on the hoodie and wore it to school. The reception was very positive, and students asked Parker where he got the hoodie from.

This was the start of his clothing brand, “absent.” 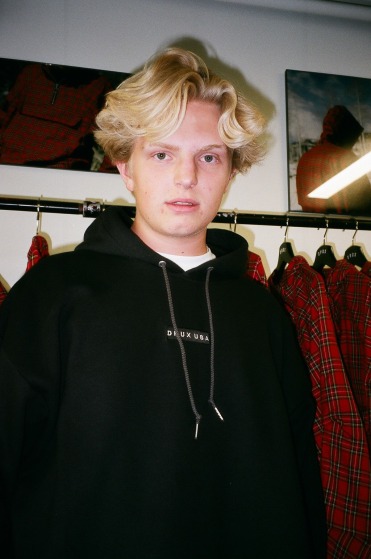 The 18-year-old creator of the clothing brand “absent,” Parker Jeppsen.

The creator of “absent” states that so far he has not been affected by too many hardships, other than creative block. Parker comments that he is resilient and able to recover from any issues quite quickly.

However, the designer states that he has become quite protective of his techniques and art as people can copy his ideas, and approaches once they notice he is succeeding.

Parker states that he is ready for any challenges that come his way.

Growing up, Parker comments that he has always been into clothing. The designer states that although he is still a kid, and “naive,” he is starting to learn more about the industry and his career.

Jeppsen states that he never thought he’d be where he is at now, and he hasn’t even scratched the surface yet.

“Hoping to make the best of my young years, and it’s looking ok for me,” says Parker.

Parker comments that his career is his passion, and his business is growing exceedingly fast, to the point that he is nervous and excited at where his brand will be at in even 6 months due to its success rate.

The designer’s friend, Jake, taught Parker a lesson that resonates with his life and beliefs. The lesson is “it’s not about proving others wrong, but about proving yourself right.”

Parker comments that he knows he can be successful, and he only needs to prove that to himself. Jeppsen states that going to going to college, and getting a job he hates is not on the table for him.

He calls this the “American Dream s***” which he does not want to be a part of. He wants to focus on his art instead.

The designer only learned how to sew 9 months ago, and never expected to take “things” so seriously.

“There’s so much money to be made in the cut and sew side of things,” says Parker.

I also asked Parker to elaborate on his pop-up shops, and the events leading up to them, focusing on a “typical day.”

Parker states that plane flights are anxiety-inducing but fascinating at the same time.

When the young designer traveled to Charlotte for a pop-up store, he brought a backpack with only 2 changes of clothes, a phone charger, and his toiletries.

He also brought a suitcase filled with over 100 tee shirts, as Parker was hoping to sell them all so the trip wasn’t as heavy on the way back home for him. 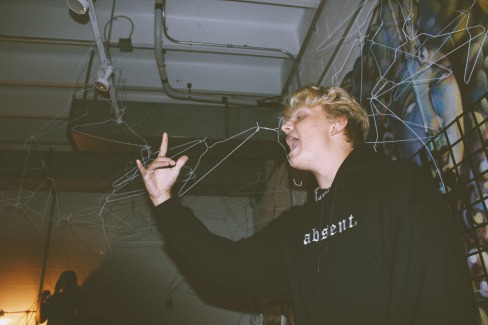 Parker at his pop-up store event in Charlotte, in collaboration with artist 10cellphones.

The pop-up store was extremely successful. Parker comments that he loves the city, and he made a lot of friends on the trip that he still communicates with frequently today.

“Traveling is so crucial for personal growth as well as for your business’ growth,” says Parker.

The creator of absent brings light to one of his favourite moments so far in his career.

On his trip to Charlotte, North Carolina, as touched on previously, Parker comments that it was so surreal to have over 200 people turn up to his popup store. Parker’s friends threw a music show, and out of the 100 tee shirts Parker brought, almost all were sold.

Parker states that this event in Charlotte was a collaboration event with his friend, artist 10cellphones. The designer also states that he has further collaborations in place with individuals that he looks up to, even before he started his brand.

The creator of “absent” also gives advice to readers who may want to start their own clothing brand. 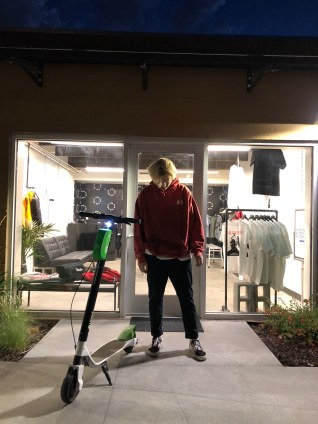 Traveling is so crucial for personal growth as well as for your business’ growth,” says Parker.

Regarding marketing advice, Parker comments that he does not want to give out any of his tricks just yet, but “it is easier than you think.”

Parker Jeppsen states that he hopes to see himself happy with everything as he works so hard and wants to find a balance.

The designer also wants “absent” to reach a stage in which the brand becomes self-sufficient and he can do less talking. Parker also comments that he won’t give up as he does this for himself, and the fact that he has a platform growing by the day makes it all worth it.

“Making clothes will make me immortal, and there are a few people who want me dead so I’ve got to make it work while I’m here just in case they get me before I’m ready,” says Parker.

Regarding his art, Parker states that most of his friends are his inspiration, as is the world around him, and is trying to put his positive energy into the world.

Parker states that readers can look forward to a short film, new clothing, and more art.

The designer would also like to work with Corbin, and Tyler Grosso if speaking about higher personalities. Otherwise, Parker likes to just work with his friends.

” I don’t really ask for co-signs though,” says Parker.

To stay up to date with Parker Jeppsen and his brand, “absent”, be sure to follow his social media listed below:

I would also like to thank Carolina Culture for setting up this interview.